Soil Screening, why it matters and how to use Soil Amendments 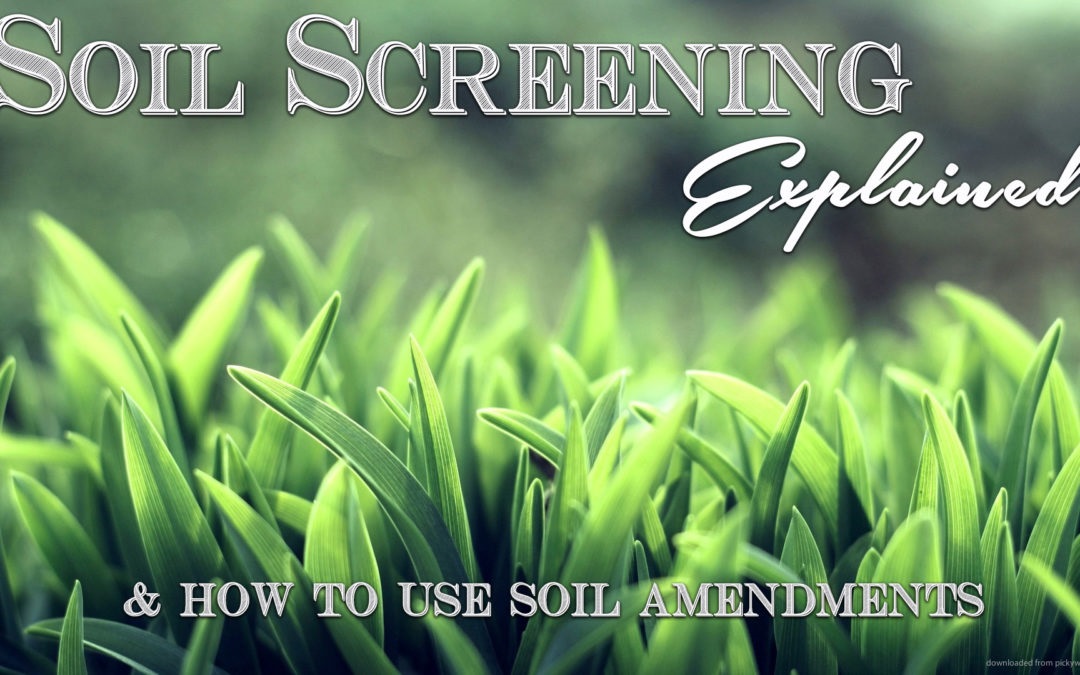 How to use soil amendments and understanding soil screening

Remember when caller id was implemented? All of the sudden, you could dodge sales calls and your Aunt Martha! Much lesser known but truly important is the ability to also screen, is soil.

Much like you can screen calls from Aunt Martha, you can also purchase organic screened topsoil that’s also free of … irritants. This is more useful and impactful than you might realize. Soil screening doesn’t seem important. In fact, it seems more like a thing kids do with sand buckets.

The fact is, under many concrete pads is soil that is screened and compacted. Where you see green spaces, chances are that soil has an amendment to better support plant life. This article explains why we need to screen soil as well as how to use soil amendments.

If you are thinking that “dirt is just dirt”, well, we are happy to inform you that there’s much more to it than that.

There are all types of soil. For every area in which there is dirt, there’s a little bit different stuff in that dirt. So much so, that it’s good to get your dirt tested to see if there’s too much of this or not enough of that. “This and That” will depends on what you want to grow in the dirt or even do with the dirt. For example, grass likes loamy soil. That’s a mixture of sand, silt, and

The Science of Soil

Oh, but it’s not so simple. Let us harken back to ye old days of 8th grade when you were learning the atomic weights of all the elements of periodic table. See, the soil is made up of organic matter both living and dead and elements like:

Molybdenum, bet you don’t remember that one! Well, you should, it’s not new. Discovered in 1781 by some guy named Carl, its symbol is “Mo” and it has an atomic weight of 42. Since you’re probably not a chemist, knowing that stuff is not as important as understanding how it functions in the world. It’s actually a trace mineral that is critical to the process of breaking down nitrogen. Molybdenum pretty much only occurs in the oxidation of other metals; it travels into plants via enzymes.

We picked Molybdenum to highlight because the other vital elements found in soil are super common names that we thought you might even remember from 8th grade. Also, acidic soil is low in this trace mineral. So, it’s important to us here in the coastal region. Often times you’ll have to learn how to use soil amendments to add trace minerals like Molybdenum to soils.

Playing in the Dirt

Sorry if this science stuff is boring. It’s all of great interest to us. At American Property Experts, we play in the dirt for a living. We have the equipment to screen topsoil so that’s it’s free of visible contaminants like rocks, plastics, metals and even large vegetative debris. Contractors will sometimes hire us to come to their job site to screen the soil. The purpose of that is often two-fold.

In the construction process, it’s vital to eliminate pieces of organic debris from the soil. If a site is ill-prepared for building and a foundation is poured over an area littered with root mat, branches etc. voids will appear due to the decaying matter. This will compromise the structural integrity of the project. Many may equate this with a house “settling” and developing cracks etc.

It’s not uncommon for the dirt to be uncooperative during construction. To pour a concrete pad, the soil needs to be compacted. We screen the excavated dirt to not only remove those contaminants but to create a useable fill dirt that will compact and make a solid surface to build on top of. It’s common to see the concrete crack when the soil hasn’t been properly prepared. Additionally, the organic screened topsoil is repurposed to create green spaces.

How to use soil amendments:

Test Your Soil ~ kits are available at home improvement stores and at your local Cooperative Extension service. Having an understanding of what nutrients your soil contains will give you a baseline to spur the growth of plants.

Soil Amendment will be high in phosphorus, nitrogen, and potassium. The pH will be in the optimum range. From the coastal area, moving into the Piedmont regions, we recommend adding a ½ inch base of the amendment to the desired area and then mixing it with a tiller. In beds and other single planting situations, use the mixture according to the plant’s suggested levels.

For example, Azaleas do well in moist, acidic (pH 5.5 or so), well-drained soil with lots of organic matter, such as peat, compost, chopped leaves, or ground bark. They won’t grow in heavy clay, pure sand, or alkaline soil. If you’re planting azaleas in Wilmington, you’d do well to mix the amendment 50/50.

Since we deal in these matters, we like to spread a little knowledge around regarding the subject.

So, what is it that you want to grow again? Grass? Ok.

Grass likes a neutral pH, meaning not too acidic and not too alkaline. Grass is like the Goldilocks of plants. Grass loves phosphorus, nitrogen, and potassium to create a healthy “just right” ecosystem.

In the coastal region, our soil can obviously be very sandy and more acidic. This is where bringing in organic screened topsoil, soil amendments as well as testing and continuing to improve soil quality helps plants to flourish. Sandy soil can’t hold moisture and it heats quickly, amending this type of soil allows for a much wider variety of plant growth.

As you move away from the coast, even 20 miles inland, the soil changes are drastic and we begin to see large areas of clay. Clay soil can inhibit growth due to both density and the resistance to water. Adding a soil amendment to clay soil can significantly improve plant growth as well as drainage.

Next Up: More dirt, on dirt. Which plants love coastal soils and why!